"When I arrived in Cambodia, fellow travellers were eager to offer me advice and to share their temple experiences. The guidebooks I had read suggested walking through the temples in the morning to avoid afternoon heat. This would take a minimum of five days. Temple veterans were quick to dismiss this strategy and advised me to rent a bicycle in Seam Reap. I could see all the temples in a couple of days and the cost would be minimal. Another advisor believed a bike would be too strenuous in the heat of the Cambodian plains. A tuk-tuk could be hired for the entire day for $20. Another option was a bus tour, offered at most area hotels for a similar price."

There are no meter in the taxis in Phnom Penh. A taxi costs from 5$-7$ from the 20-50 minutes ride into and within the city centre. Cheaper, faster and less comfortable, motorbike taxis can be hired for $2 in town.
Motodups are motorbike taxis, and they are everywhere in Phnom Penh. Motodup is a khmer word, which means motorcyle taxi.
For transfer from hotel to airport costs from 8$-10$ per way and you can find it at most hotels and travel agencies near by you.

For a taxi to province, you can find it around Phsar Thmei (New Central market) or Phsar Deum Ker or at any travel agents. There are also share-taxis.
Share-taxi transport is the quickest and most comfortable way to to travel between two cities. Share-taxis run on a per seat basis.
Note that in a share-taxi, the front passenger seat is actually considered two seats, so the best option is to buy two seats and have the whole front seat to yourself, although then they often seem to sell a  second seat next to the driver, which will invariably end up being half yours. Share-taxis leave when full, meaning at least five to six passengers, though once you leave the driver may pick up more people.

At the moment in the big cities like Phnom penh and Siem Reap, most tourists can find the easy way by taking the Reumork (Tri-cycle motor) or Cyclo (Tri-cycle) at any where in city with cheap price. Cyclo is charged at the cheapest price and it is mostly used by many tourists who wanted to visit the city slowly.

Trains are available only from Phnom Penh to the Battambang on a single track. The train move only 25 kilometres an hour. The 300 kilometres to Battambang takes about 12 hours.
They depart from Phnom Penh about 5am or 6am and travel almost the whole day. Trains are very slow and very cheap, but for budget travellers, who have the time to spend on them, the reports are positive. Trains tend to depart on time.
The announcement of the commencement of train services on the southern line between Phnom Penh and Sihanoukville was on Friday 28 December 2012. It was a significant step forward for the economy and people of Cambodia. Toll Royal Railway planned to operate 3 return container services per week from Phnom Penh to Sihanoukville. The services commenced modestly with 20 container wagons and will progressively increase to 60 container wagons per service. The length of the train will increase to 1,000 meters and each train can carry payloads of up to 3,000 ton. 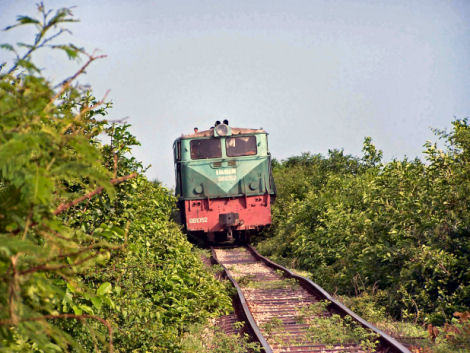