The Takťo Railway Station is a small train station near the town of Takťo in the Cambodian countryside. Passenger train services are slowly starting to bring more tourists to Takťo. Little by little, the tourist facilities at the train station are improving. Tuk-tuk drivers have started offering excursions to nearby attractions at the station, and food vendors eagerly wait eight times a week when a train full of hundreds of people stops for about 10 minutes for passengers to walk around, buy food , take photos and smoke cigarettes. The station is very quiet and not staffed on the days of the week when the trains are not running. 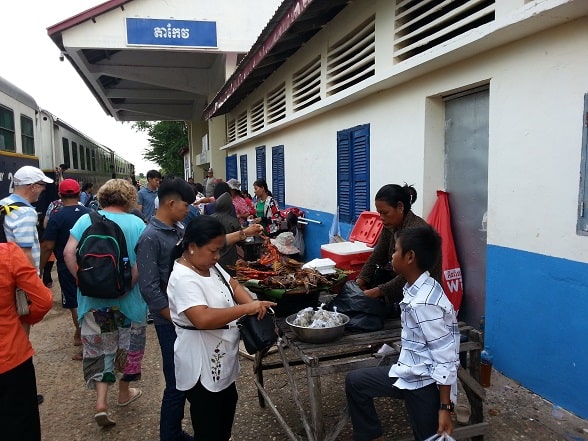 The station has a single platform that works well enough at the moment because no two trains have ever been planned in the train station at the same time. However, the Takťo train station will need to be expanded if the frequency of rail services is drastically increased.

The Takťo Train Station is a lively station, where independent food vendors can set up their stalls along the main platform and for entrepreneurial tuk-tuk drivers homemade advertisements for their place services on the wall along the side of the platform. You can buy food, drink and other useful things at this station and arrange someone to take you to a hostel, hotel or temple.

This train has changed its frequency this year and the days it ran several times. Inform at the station in advance.