The newer wooden carvings may tend to split once they are taken to a less humid climate. Most retailers will repair these items in the first year after purchase if you have made an agreement during bargaining.

It's best visited in the early morning or mid-afternoon as the heat during the middle of the day under the tin roof is oppressive. After spending a couple of hours haggling you may be in need of liquid refreshments and a quick snack. Located close to the Russian Market are two very good cafés which you may want to try – Jars of Clay, and Café Yejj, both of which are training facilities for under privileged young adults. 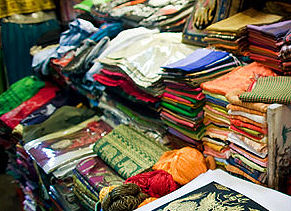