Animist believers go there to worship at the statue of the guardian spirit Neakta Kliang Meung. This statue was constructed in 1993 to replace an older statue destroyed during the war. The area in front of the statue is a place of worship, while the area behind the statue is where locals gather to play traditional games on Khmer New Year and Pchum Ben festival.

The Legend
The story goes that in 1605, the Khmer were losing the war against the Thais, when Khleang Muong ordered his soldiers to dig a pit and to cast their weapons into it; he then committed suicide by throwing himself into the pit. Seven days later the Khmer army defeated the Thais with help from the ghosts of Khleang Muong and his army of soldiers. The victory is marked by an offering ceremony here in April or May each year, at the start of the planting season and just before the rains. The pavilion at the tomb contains a life-size bronze statue of Khleang Muong, and a matching one of his wife, who, according to legend, also killed herself. The site is at the village of Banteay Chei, a few kilometres west of town off National Route 5.

It's the must-see historic site and it will be happy to take you and tell you all about the historic hero who committed the ultimate sacrifice for his King and country.
It is told that, in an selfless act, Kliang Meug took both his and his families live, to mobilize ghost forces. The story then goes on to say that the ghost forces came to aid the King’s army and helped him to regain his throne. The memory of Oknha Kliang Meung is alive and well today and very popular with Cambodian people, who wish to pay their respects at the site in Kampeng Svay village, Snam Preas commune in the Bakan district.
In 1993 an impressive golden statue has been erected to dedicated to his honor. The tomb is also at the centre of religious festival Loeung Nak Ta, held in May.
The Cambodia people believe that they should visit the site each year to pay their respects and in return believe they will have good luck, health and peace. If you only have a couple of hours to spare this is an ideal short trip, as it takes only fifteen minutes to reach. And hiring a motodup should cost approximately $1 USD for a return trip. 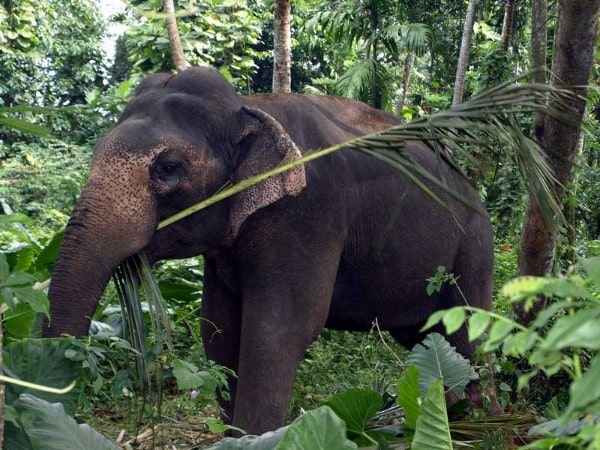 Elephant in the Cardamom Mountains