Kampong Chhnang is a province famous for its very fine (clay) pottery. The name of the province says it all in Khmer: Kampong Chhnang means "Port of Pottery". The people of this province enjoy making pots, vases and various other types of ceramics, when they are not busy with the (rice).

The quiet village Ondong Rossey is the region from which the famous red pottery originates. The village is situated about 7 kilometers from the capital. Almost every household in this region, which is surrounded by serene rice fields dotted with palm sugar, does make some form of pottery or so. Against the sugar palms is usually a ladder. Sap is drained by cutting. Off a thin slice of a branch daily This juice in large quantities from the tree and contains a sugar concentration.
The pots are usually glazed, but decorated with etched scenes or applications.
They are either made with a base wheel (smaller pieces), or they turn them into shape with a heavy wooden spatula. The complicated process is fascinating to watch.


The clay is extracted from the nearby mountains. It is then processed into pits with water. Thereafter, it is taken out and placed on a plate, thrown in a metal pail, and kneaded by hand against the edge. A kind trowel turns the clay against the inside of the bucket. This process takes only a few minutes, after which the bucket is reversed and the clay comes from the metal bucket. 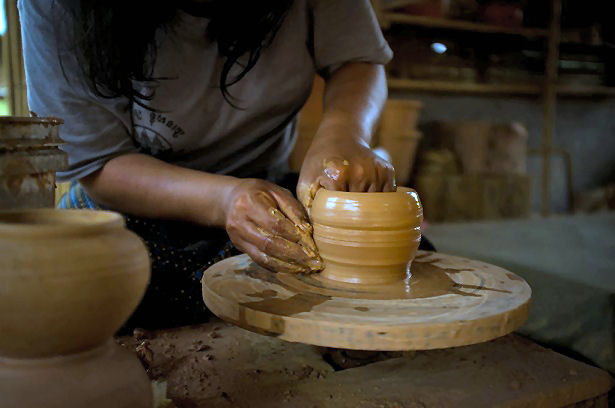 The amount of energy the sugar palm produces beats all other crops (thus making sugar palm three times as much energy as sugarcane). This is partly because very efficiently captures the tree by an ingenious structure of the leaves sunlight. He is by harvesting all year round. Once planted in addition, the palm grows in many poor soils. 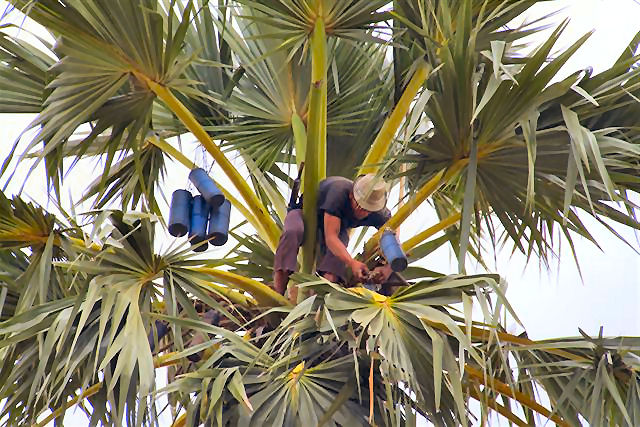