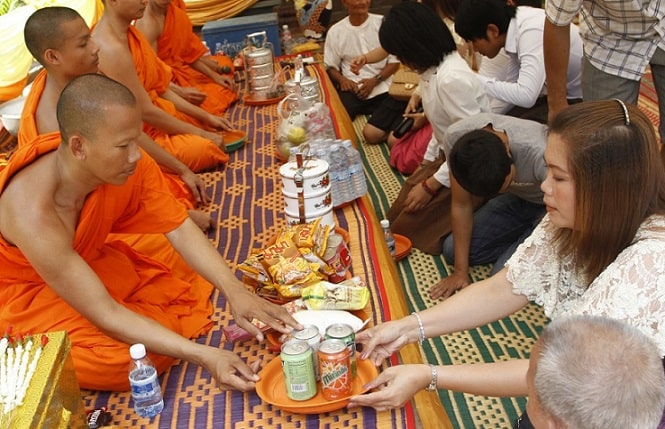 Pchum Ben is a 15-day Cambodian religious festival, culminating in celebrations on the 15th day of the tenth month in the Khmer calendar. During these 15 days, usually from the end of September into October, this festival is dedicated to blessing the spirits of the dead and is one of the most culturally significant in Cambodia. The exact date defers year to year as determined by the lunar calendar. Each household visits their temple of choice and offers food to the monks.

The 15th day is called Brochum Ben or Pchum Ben Day. During Kan Ben, people give Buddhist monks gifts of food and candles. At night Buddhist monks recite a protective prayer. Cambodian artists play traditional music such as yike and lakhon basac. Pchum Ben Day is the biggest celebration. Villagers come from all around to prepare the pagoda of their village the night before the celebration. Pchum Ben is when the villagers gather to celebrate in their villages.

In the day time, when many Cambodians pay their respects to deceased relatives of up to 7 generations. Monks chant the suttas in Pali language overnight (continuously, without sleeping) in prelude to the gates of hell opening, an event that is presumed to occur once a year.
During the period of the gates of hell being opened, ghosts of the dead (preta) are presumed to be especially active, and thus food-offerings are made to benefit them. People bring food to the temple for the monks and to feed hungry ghosts who could be their late ancestors, relatives or friends. Bay ben (balls of rice) are offered to ghosts at dawn. People believe ghosts with heavy sins cannot receive food during the day. Bay ben is made from sticky rice and sesame. Sometimes people add coconut cream to make it more delicious. 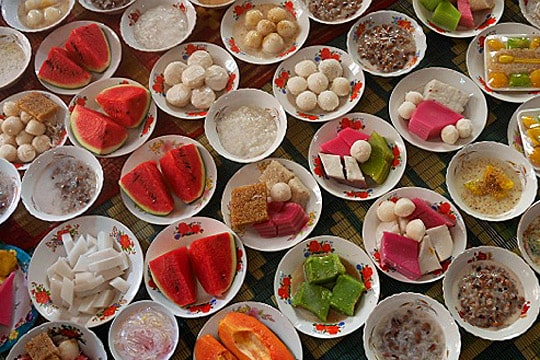 "Hungry ghost" is one of the six modes of existence in the ‘Wheel of Life’. Hungry ghosts or ‘Preta’ which means ‘departed ones’ in Sanskrit, are pitiable creatures with huge, empty stomachs and pinhole mouths; their necks are so thin they cannot swallow, so they remain hungry.  It is believed that beings are reborn as hungry ghosts because of their greed, envy and jealousy.
Some of these ghosts are having the opportunity to end their period of purgation, whereas others are imagined to leave hell temporarily, to then return to endure more suffering; without much explanation, relatives who are not in hell (who are in heaven or otherwise reincarnated) are also generally imagined to benefit from the ceremonies.

Pagodas are usually crowded with people taking their turn to make offerings and to beg the monks to pray for their late ancestors and loved ones. Many remain behind at the temple to listen to Buddhist sermons.

In the early morning of the last day of the Pchum Ben Festival, visitors can join the throngs at the pagodas and take photos of local people of all ages in traditional costume. Women especially, don their best traditional dress, and come wearing their silk, embroidered blouses and scarves, bearing offerings, candles and incense. The importance of the last day is centred around those souls who may have bad karma, Priad spirits, as this is the only day that they may receive offerings and it’s said that they could benefit from the good karma going around. It is believed that Priads are afraid of light and will only connect with their living relatives during the darkest day of this lunar cycle, the day of Pchum Ben and receive prayers and offerings.

Reincarnation is deeply enrooted in Cambodian and Buddhist culture, and Pchum Ben is a time of reunion, remembrance and celebration. When families have the opportunity to show appreciation for one's ancestors and show their love for them. The offerings of food and good karma may aid lost souls and guide them back into the cycle of reincarnation. If ancestors are reincarnated, their second chance is to collect good karma for themselves and nurture a peaceful inner spirit this is the final blessing living relatives wish for their ancestors. 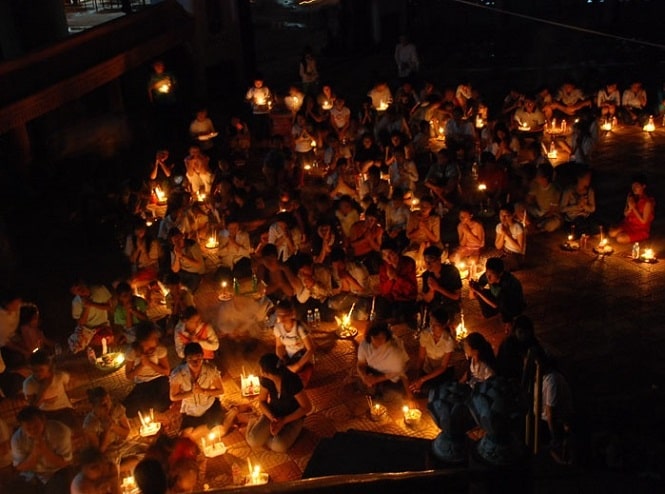