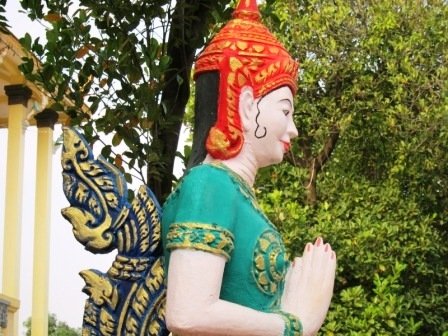 The celebration of the Khmer New Year has a very interesting legend. You will notice that in the picture of the New Year Angel, she comes carrying a jeung bian (golden tray) with the king of the gods' head. The story goes that once there was a very smart boy called Dhomabal Khumar, born to a very wealthy family. Dhomabal was exceptional in that he spoke four languages, read at 7 years of age the ancient texts and canonical scriptures that monks study and spoke to the birds. 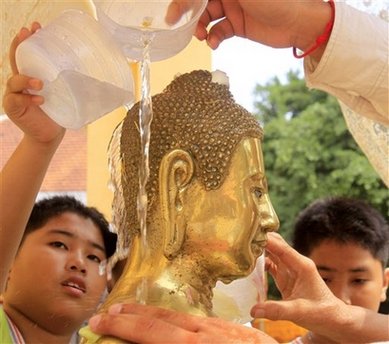 The village people loved him as he was not only clever but also kind. His father built him a beautiful temple close to the river where the birds lived and there Dhomabal would speak to the birds. But then, the king of the gods, KabilMohaProm, became jealous of Dhomabal and issued a challenge. He told Dhomabal that if he could not answer the questions he posed to him, he would cut his head off. But, if he could answer it, KabilMohaProm will cut off his own head. The questions: Where do you find happiness in the morning? The Noontime? And, in the evening?

As Dhomabal did not know the answer, he run away to the forest. Fearing for his life, he slumped into a tree where two eagles were perched in a conversation. Dhomabal heard them talking about the question on happiness to which they gave the answer. So Dhomabal learned the answers: in the morning, you find happiness in your face; midday, you find it in your body, and at night, your feet. Dhomabal gave the god the answer and he went to the king of the gods and gave him the answer. Because it was correct, the king of the gods had his own head cut off. He then told his eldest daughter to put his head in a jeung pian and carrying this golden tray circle around the Sumeru mountain for 60minutes and then bring his head to the Khimalay temple in heaven. His head cannot be thrown to the ground as this will cause fire, to the the sky as this will cause drought or to the ocean as this will dry up so the seven daughters have to take turns carrying the head. From then on, as the king of the gods cannot anymore bless his people, he sent his seven daughters as his angels to give his Khmer people blessing at the start of the new year. Because of the story of Dhomabal, to get the blessing for the new year, the Khmer follow the ritual of washing their face in the morning, their body in midday and their feet in the evening. 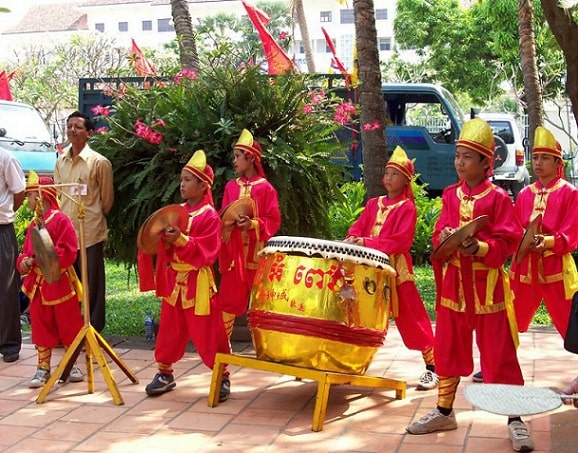