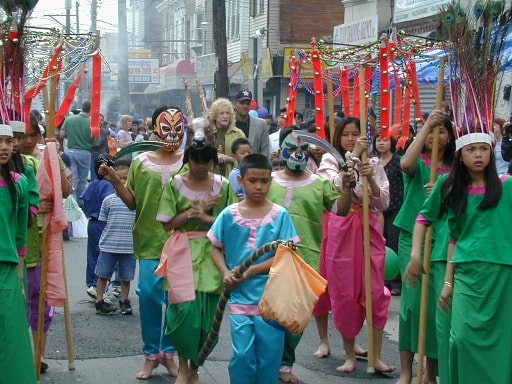 Cambodian New Year is most important holiday. The cities empty as Cambodians rush to spend the holiday with family. The holiday lasts for three days beginning on New Year’s Day. This time of the year is at the end of the harvesting season. The farmers enjoy the fruits of their harvest and relax before the rainy season begins. Gifts and tips are especially auspicious during April and should be accompanied with the phrase ‘Sok Sabay, Ch’nam Tmey’ (Happy New Year!).

It is a lunisolar calendar having months that are alternately 29 and 30 days, with an intercalated day and a 30-day month added at regular intervals. All forms of the Buddhist calendar are based on the original version of the Surya Siddhanta, which dates to the 3rd century (both the original and medieval forms of the Surya Siddhanta are used by the various Hindu calendars).

Khmer New Year Traditions
Everyday people visit temples to get blessings from monks and priests. They build a sand hill on the temple grounds and decorate it with five religious flags one on the top and four around the sides. This sand hill represents Buddha's five disciples.

People of Cambodia follow a tradition to sprinkle holy water on each others faces in the morning, on the chest at noon and on the feet in the evening. These days people also pour coulored water on their friends and relatives. Coulored water symbolize different coulors of life in future. Tradition of throwing powder on each other at the time of New Year is also very famous. 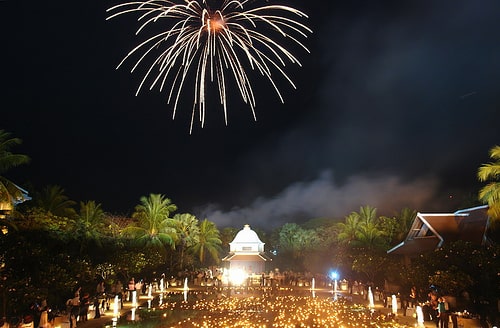 First Day Celebrations - Moha Sangkran
The first day of the New Year is called Moha Sangkran. It is believed that on this day God's angels come to earth to take care of it's creation. To welcome these holy angels, people clean and light up their houses. Members of the family place an idol of Lord Buddha on an altar with flowers, candles, incense sticks, a bowl of scented water, eatables, drinks and shaped out banana leaves.
Food prepared at the time of Moha Sangkran is offered to monks and priests of the temples.

Second Day Celebrations - Vanabot
On the second day of Khmer New Year celebrations, people offer charity and alms to the poor. It is also considered good to present gifts to family members and relatives. At some official places, employees get gifts and other monetary incentives.

Third Day Celebrations - Leung Sakk
On the third day of New Year celebrations people wash all the idols of Lord Buddha with scented water. It is said this ensures good rains all year long. Children pay respect to their elders by washing their feet and get blessings in return. This ceremony of giving a special bath to Buddha statues, monks and elders is called Pithi Srang Preah.