"We arrived upstream the river we were staying by and there it was! I first only heard cracking and swishing on the other side. Then out of nowhere two big elephants appeared. They were feeding on grass and leaves and didn’t seem to be bothered by our presence. I learned that they were not wild ones but belonged to an elephant conservation camp nearby. However, they still roam the forest freely and it was awesome to see them in their natural habitat. Not 100% wild, but I guess this is as close as it will get for me. We crossed the river and I asked Phallet if we could get closer. He wasn’t so sure and a little hesitant but I just went for it and got some good shots. Elephants are really beautiful animals." 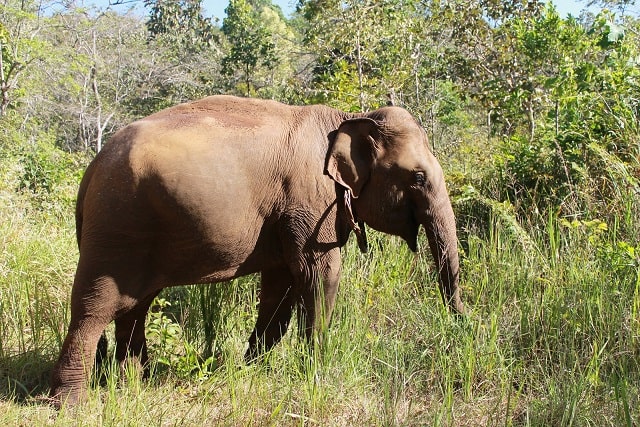 When you live in a foreign country it is all very exciting, but on days like Christmas even travel fans like me can become a bit melancholic. I started badly missing mulled wine, German Christmas cookies and markets, and of course family in the build up to the big day. So there was really only one thing we could do to find a distraction – to spend Christmas in the jungle, trekking in Mondulkiri, on the back of an elephant, surrounded by venomous snakes and spiders, and sleeping on hammocks beneath the stars.
After an eventful 8 hour bus journey we made it to Mondulkiri in east Cambodia and were picked up at the bus station by our Nature Lodge. This complex in the beautiful hilly forests of Mondulkiri had a treetop bar complete with a Christmas tree and gorgeous wooden bungalows. 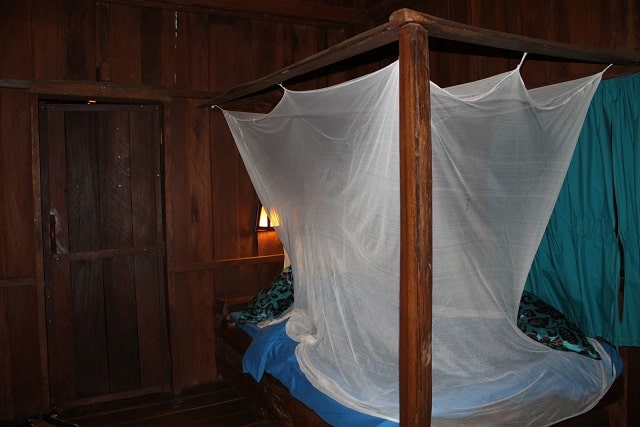 We had an early night as we had a two-day jungle trek ahead of us. So the next day we left the comforts of our bunglaow early in the morning and drove to an indigenous village where we met our mahout (elephant guide) and his elephant. The elephant was a gorgeous 20 year old nameless girl, so we called her Rudolph to suit the festive vibe.

Rudolph was our rock, carrying our food supplies and camping equipment with grace and ease. And when we had to cross raging jungle rivers she kindly let us sit on her back as well. But apart from those river crossings, we bravely trekked through the jungle for about 6 hours each day on foot.

When we reached camp we started a fire and had a refreshing shower under the nearby waterfalls, whilst our tour guide went fishing to catch some dinner. 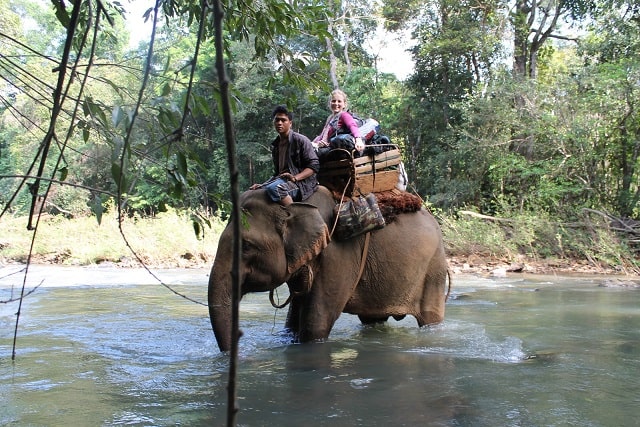 Later on in the evening we noticed that the wind had picked up, so the idea of sleeping in a hammock being blown around was not very appealing, nor very safe with branches crashing down all around us. So we opted to hang up our hammocks in the wooden huts nearby, only realizing the next morning that the hut next to us had a huge, hand-sized venomous spider in it, so god knows what was in our hut. Trekking in Mondulkiri is truly adventurous! I felt fairly safe in my hammock though as it had an integrated mosquito net, so even if a spider had fallen onto me or a snake had crawled over me, it wouldn’t have touched my body – hopefully.

As Rudolph spent the night roaming around the jungle, probably looking for some male company, she looked a bit dirty when she came back the next morning, so our mahout decided to give her a bath before we headed back to the hotel. 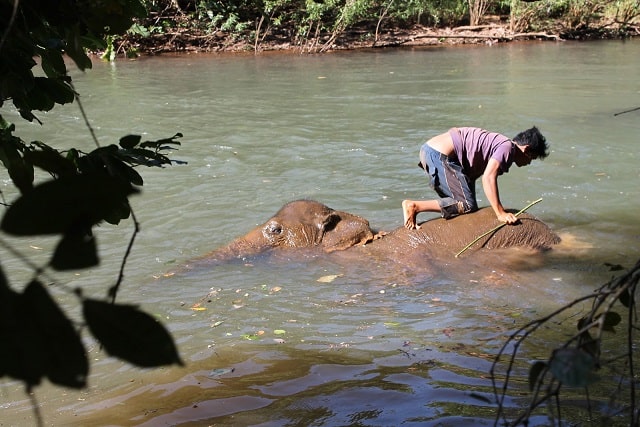 The trek back was a bit more exhausting as we were stiff from the day before, tired from our night in the hammock, and a lot of the trek back was uphill without much shelter from the fierce midday heat. But it was definitely all worth it and an unforgettable Christmas! I highly recommend trekking in Mondulkiri if you don’t mind roughing it a little bit. 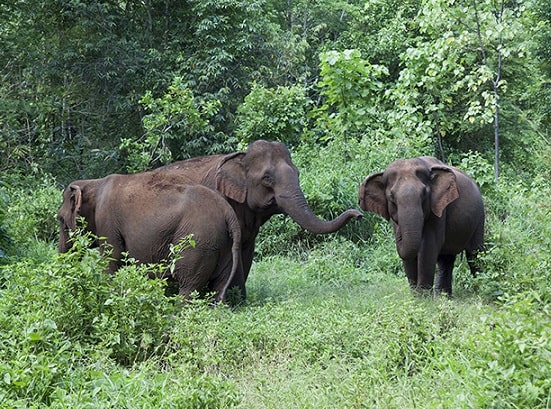