Kandal province completely surrounds the capital Phnom Penh. The province is also a part of the greater Phnom Penh Metropolitan Area with more than a million people in and around the province. During a trip from Phnom Penh is the border between the two provinces almost unrecognizable.

The province consists of a typical flat and wet area with rice fields and other agricultural plantations. The average altitude of the province is not more than 10 meters above sea level. This province has also two of the largest rivers of Cambodia, the Bassac and the Mekong.

Kandal as an economic belt of the capital Phnom Penh. Agriculture and fishing are the two main industries of the province. Main products of Kandal are palm oil, peanuts, rice, and pepper.


In addition to farming and fishing, the province also a thriving cottage industry, specializing in wood carving, silk and handicrafts.
Many garment factories are located in Kandal province, where more than 500,000 employees work. 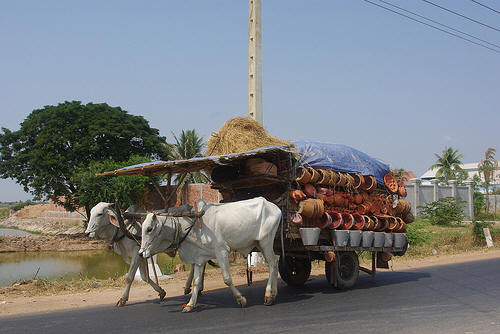