The grave of Pol Pot

Want to see Pol Pot's grave or his broken toilet seat? How about a visit to the house of a feared Khmer Rouge commander known as “The Butcher”? Welcome to the town of Anlong Veng, a former Khmer Rouge stronghold which hopes to become the next must-see destination on Cambodia's dark tourism trail, but which faces calls not to glorify its role in the country's bloody past.

Anlong Veng is in the area of the Dângręk Mountains, in the far north of Cambodia. It is located 125 km north of Siem Reap and close to the international border crossing with Thailand (have a look at the map of Cambodia). There is a dam just north of the town.

Prepare to be underwhelmed! A tin roof and a sign urging visitors to keep the area clean are all the tribute given to Brother Number One by his country.

For an organisation famed for its secrecy, one shouldn't be surprised that the exact circumstances behind Pol Pot's detah remain murky. Depending on who you talk to, he was murdered by his erstwhile comrades, poisoned by the Thai military, suffocated due to illness or died in his sleep -- just to name some of the better known theories.

What is known is that once he died in April 1998, his body was cremated on a pile of old car tires bringing to a close the life of one of history's worst genocidal maniacs -- unpunished.

The grave is a simple affair, though take a close look and you'll see the metal wire that would have been part of the tires. There is also a small shrine here recently added by a Thai businessman, who, upon paying homage to Pol Pot, dreampt the correct lottery results and won a mozza. Note the small statues of Pol Pot and his wife inside the shrine.

Towards the rear of the enclosure there is a pile of smashed porcelain - Pol Pot's toilet apparently.

Overall, it is one of the more bizarre attractions in Cambodia, odd yet telling that the grave has not been vandalised in any way whatsoever.

A Thai lottery winner has erected a spirit house on the site in honour of the former Khmer Rouge leader, who, he claims, appeared to him in a dream with the winning numbers. A small pack of children often materialises when visitors arrive. 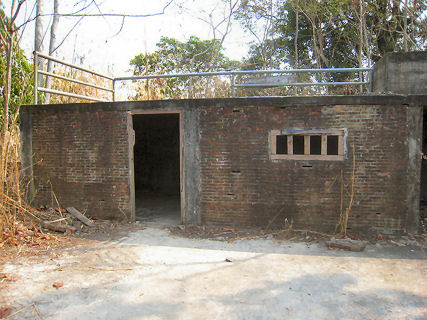 The remains of Pol Pot's bunker

Pol Pot's House: Not much left here but a shell of a house, overgrown with foliage and 'decorated' with profane graffiti. Water storage tanks, an underground chamber and a nearby pond round off the excitement.

Walking through the brush the guide leads me to the spot where Pol Pot lived his final months. After his purge, he was placed under house arrest in a simple dwelling where he remained until his death on April 15, 1998. The house is gone now. While some reports say it was hit by an RCAF shell, my escort tells me a simpler tale. After Pol Pot died, the house was stripped, the materials taken elsewhere. The only signs of past habitation are a slab of cement, a broken toilet, and a few medicine jars and other personal effects. I ask my escort if they'll let this toilet disappear. "No, then there will be nothing left for the tourists to see," he tells me. But he offers me a token piece of broken toilet. A souvenir of Pol's last pot.

A few meters away from the home site is a pile of ashes with a couple of sticks on top. It is Pol Pot. His body, thrown on a pile of tires was most unceremoniously cremated here. My escort reaches into the ashes pulling out what he tells me is a bone fragment. He offers it to me. A souvenir of Pol Pot! 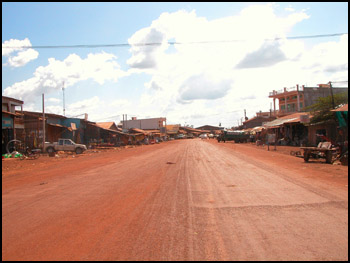 Anlong Veng, near the Thai border, was the last stronghold of the brutal Khmer Rouge leadership. In front of Ta Mok's house lies the deteriorating remains of Pol Pot's Mobile Radio Station. Ta Mok, a senior leader in the Khmer Rouge is better known as "Brother Number Five" or the "Butcher," for his role in masterminding many of the massacres and purges that took place while the Khmer Rouge was in power. 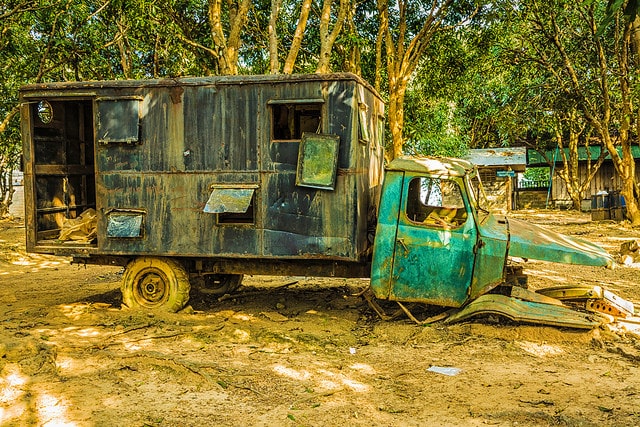 Read about the genocide Pol Pot.