The horrible genius of the Khmer Rouge lay in their attention to detail. Prisoners were photographed and interrogated on their life details before being chained to their cells. This impersonal collection of data is presented to the visitor, room after room full of photographs of doomed men, women, and children, a glimpse of the estimated 20,000 prisoners who entered Tuol Sleng.

The prisoners were overwhelmingly Cambodian, although the prison did see its share of Americans, British, and Australians. The twisted ideology of the Khmer Rouge meant that anybody with an education, anybody who wasn't from around there, even anybody who wore glasses was suspect, and could (and often did) end up screaming their lives out in Tuol Sleng.

You'll also see a torture chamber, left in almost the same condition as they were found by the Vietnamese invaders who kicked the Khmer Rouge out in 1979. The torture devices are also present, with detailed explanations on how they were used.

The end result of these devices is also nearby - cases of skulls belonging to S-21's unfortunate victims. (Tuol Sleng's most grisly attraction, a "skull map" of Cambodia in 300-plus skulls, was dismantled in 2002. ) 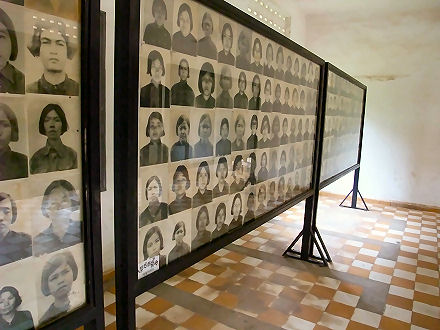 The Vietnamese found Tuol Sleng by following the stench of decay. When they arrived, they found only seven prisoners alive (just barely), and several other less fortunate folk chained to iron beds, only recently killed by the escaping Khmer Rouge. 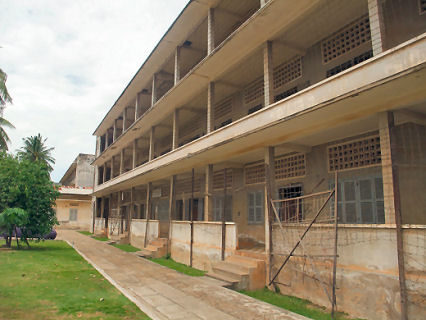 Read about the Pol Pot's grave.