Chi Phat is located in Koh Kong province, which is in the Southern part of the Cardamom Mountains. Chi Phat, a small village on the Preak Piphot River, is a former hotspot of poaching and illegal logging, now it is a hub of environmentally-friendly adventure activities.
In an effort to protect the southern area of the Cardamom Mountains from poaching, logging and land grabbing by turning the rainforest into a source of jobs and income for local people, the Wildlife Alliance has launched a project.
It was once notorious for its loggers and poachers, but now the river village of Chi Phat is the home of the Wildlife Alliance’s pioneering community-based ecotourism project. It offers travellers a unique opportunity to explore the Cardamoms Mountains, while contributing to the protection of the project.

The loggers became guesthouse owners, the poachers became tour guides, and the farmers found new businesses without having to expand their land. The forests became a sustainable asset; not something that needed to be destroyed in the name of progress.
Villagers are using the highly fertile red soil of the area to grow rice, bananas and other seasonal crops.

Around Chi Phat is the largest remaining track of rainforest of Southeast Asia situated directly into the heart of the Cardamom Mountains. There is a lot of fascinating nature at Chi Phat, including mountains, waterfalls, rivers, evergreen forests, low land swamps and Malaluka swamps.
Thanks to the good network of forest trails at Chi Phat tourists get the chance to watch quite a huge diversity of wildlife and birds. Monkeys, hornbills and other rainforest creatures can often be seen along the banks of Stung Proat, an unlogged tributary of the Preak Piphot River accessible by boat.

There are variety of outdoor adventure activities to offer. Tourists can take one- to five-day (four-night) treks through the jungle, go sunrise bird watching by kayak, hire motos or mountain bikes to visit several nearby waterfalls and shoot (with a camera) monkeys and hornbills with a former poacher as a guide.
Destinations include an area with mysterious, ancient burial jars; and – 45km away – the Areng Valley. On overnight trips you sleep in hammocks or at one of four campsites set up by the Wildlife Alliance, equipped with ecotoilets, solar-powered electric light and either hammocks or field beds.
You must be prepared though if you want to do a multiple days tour through the Cardamom Mountains. A night in the jungle can be nerve-wracking, no matter how tightly your hammock is zipped. The forest pulses with the grunts of wild pigs, the slithering of snakes and ghostly calls from the treetops.

Two of the most particular interest are the multiday mountain-bike safaris deep into the Cardamoms and the sunrise bird watching trip. The latter involves an early wakeup call and a 1˝-hour longtail boat ride, before you jump in the kayaks and paddle along the placid Stung Proat, an unlogged tributary of the Preak Piphot River. Silver langurs, long-tailed macaques, greater hornbills and other rainforest animals can often be seen along the banks of Stung Proat. Gibbons are also hard to spot, but can often be heard calling to each other through the forest canopy. 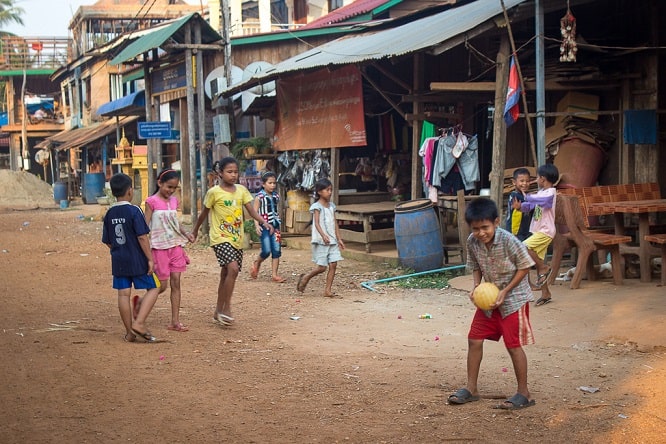 There are now 13 families with guesthouses with a total of 67 rooms. 10 families also offer a homestay option with a total of 16 places. It’s taken quite a few years to get to this stage but word has spread and Chi Phat is now mentioned in several influential travel guides. And the numbers speak for themselves.
It also has a local market area, which is dominated by Vietnamese, Chinese and other venders which come from many different places. You can buy something from the local market with dollars or Cambodian currency.
In 2008, the community of Chi Phat had an income of just $7,000 from tourism. In 2012, the figure was just shy of $100,000. The number of international tourists rose from 170 in that first year to 2084 in 2012. The total income figure comes not just from international visitors, but also from domestic tourism and from a growing investment fund from profits.
The central office in the Chi Phat Village has a restaurant, where you’re encouraged to eat all your meals. There’s a rotation system so different families share the cooking duties and the salaries. The office will also arrange your accommodation to make sure all the providers get an equal number of customers over time. It’s almost a perfect little socialist ideal.

Chi Phat is named after a holy man named So Phat. It was called So Phat Village. It was changed into Chi Phat because in Cambodian Culture someone, who is a sanga, (a holy man) is called Chi. This location comes from the story says: So Phat was a King.
One day he was separated from his brothers by a terrible storm while trekking in the jungle near Stroerng Prath Stream and then he lost his way in the jungle to reach this area. He had decided to be a Sanga since he could not find his way home. After that the rescue team came seek for him, and reach the same place to camp living here.
Long time later on, they captured him as a holy man and invited him to be a village’s head from then on.

"After a 4.5 hour trip from phnom penh to Anduong Tuek ,I negotiated a $5 ride up the river with a local boatman. I was warmly welcomed at the CCBEN centre, arranged to stay at the eco lodge at $20 per nigh. I could have had a homestay or guesthouse cheaper but I was quite flush at the time and wanted to use my spare cash to support the work being done here.

Let's get one thing straight now. This is not a place for the average tourist, facilities are few, life is simple, there are no karaoke bars although I did find one TV. Be prepared to rough it.

Chi Phat is a place where you immediately feel welcome. You are not the centre of attention, but every1 is friendly and helpful towards you. I did a 2 night trek into the jungle, leeches and mosquitoes galore, no toilets and slept in a hammock under a makeshift bamboo shelter. The guides and cooks made some amazing meals over an open fire with a couple of woks. It was heaven."