The south gate is the best restored and most popular of all, but also the most busy because it leads directly to Angkor Wat. The east and west gates, found at the end of uneven trails, are more peaceful. The east gate was used for a scene in the movie "Tomb Raider" , in which the bad guys broke into the "tomb" by pulling down a giant apsara (it was actually made of polystyrene).

At the centre of the city is Jayavarman's state temple, the Bayon, with the other major sites clustered around the Victory Square immediately to the north. 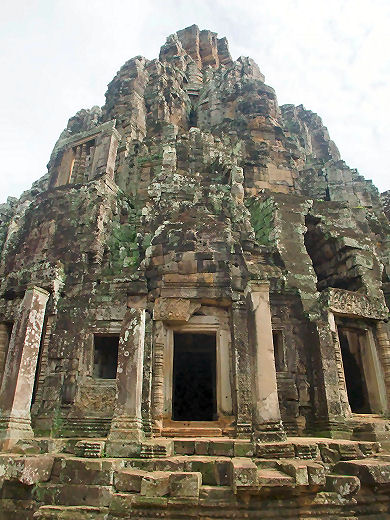 Exactly in the centre of Angkor Thom are the temple grounds of the Bayon. The crowning glory is the huge dome of the Bayon'. This is under restoration at present and will be a spectacular sight when completed.
The temple grounds have puzzled archaeologists because they do not fit the Hindu religion as does Angkor Wat. Therefore it is assumed that King Jayavarman VII introduced elements of the Buddhist faith into the religious system of Angkor, though it is assumed they were lost after his death.

The palace area of Angkor Thom is located directly to the North of the Bayon. Its basic features were laid out during the reign of King Suryavarman I, 150 years before the construction of Angkor Thom. From the centre of the palace complex rose the Heavenly Palace, Phimeanakas. The king of the Khmer always used to spend the first part of each night in the uppermost part of this Heavenly Palace, where according to legend he had sexual intercourse with the sun queen. 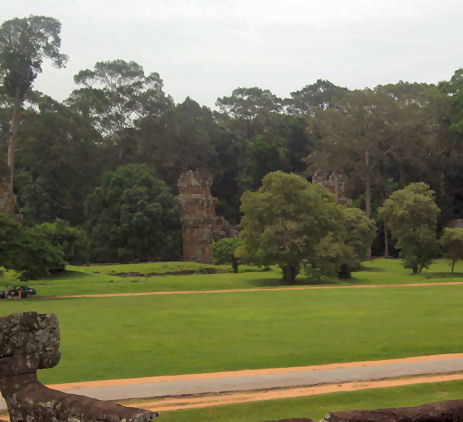